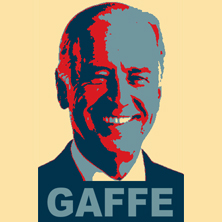 Biden again. In Virginia he praises his good friend Democrat Senate candidate Tom Kaine. Except his name is Tim. #GafferInChief

Whoops! Names are hard. Especially remembering the name of a former governor of Virginia and DNC chair.

Biden starts off: “It’s good to be in a state that’s going to be represented by Tim Kaine!” Then, whoops: “I’m a big Tom Kaine fan.”

Indeed. Imagine the wall-to-wall coverage if it was a Republican gaffe.

Thanks to the VPOTUS for the shout out today. I love Jay Biden!

It’s time to fire both Joe and Jay Biden.