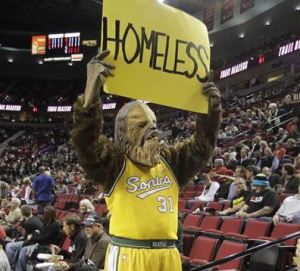 If the OK City Thunder (my former Sonics) win the NBA title then I will vomit grief.

The city of Seattle feels cheated.

Following the 2007-08 season, the Seattle Supersonics controversially relocated to Oklahoma City and rebranded the franchise as the “Thunder”.

Sonics fans have been angry and in denial ever since, bouncing back and forth between the first two stages of grief. The loss of their beloved franchise is going to take years to overcome.

Oklahoma City defeated the San Antonio Spurs 107-99, coming back from a 2-0 series deficit and winning four straight games. Seeing the Thunder reach the Finals with Kevin Durant (a player they drafted) stings more than most fans can imagine.

The movement to bring the franchise back to Seattle is strong, so much so that a movie called Sonicsgate: Requiem for a Team was released in 2009 and aired on CNBC this past April.

Only thing that should happen in the NBA is that the #Supersonics story should be told a lot.Every1 should know about the shady NBA. #sonics

A stolen franchise owned by amoral, homophobic Stern-cronies just made the NBA Finals. Love these players not this team.

I'm thinkin about how sick that would be to see the sonics playing in the finals In seattle! I bet our fans r way better than Oklahoma's!

Sonics fans never die! Thx for your support all these years. Support http://t.co/iuhguQ81 & we'll see you at the @sonicsarena rally June 14!

If you search "sonics" on twitter, you get the definition of vengeful rage.

Meanwhile, while the Pacific Northwest shed their lonely tears, the rest of America is ecstatic for the Thunder.

Congratulations to the OKC Thunder going to the NBA Finals. Beating the Spurs 4 straight is quite an accomplishment!

Even if ur not a Thunder fan, u still have 2 give them respect for road they traveled to get to the NBA Finals -thru Dallas, the Lakers n SA

I just want to thank GOD for this blessing! #WesternConfChamps #ThunderUp

1st time since 98 @Spurs, @Mavs r @Lakers not in @NBA finals, all beaten by @okcthunder . Congrats to OKC #THUNDERUP

The best thing about the Thunder winning the West is that Lil' Wayne will be denied a seat at more than half of the NBA Finals games.