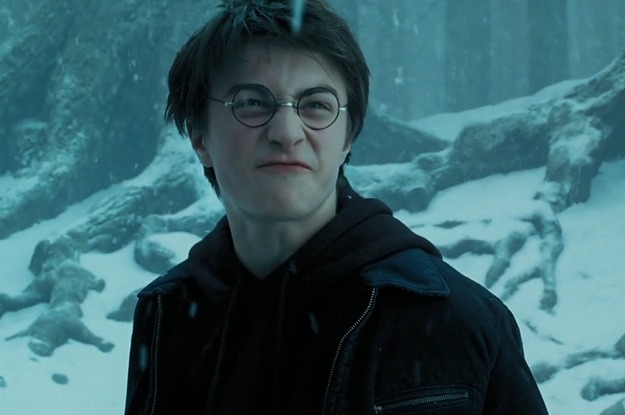 Alternatively titled, “Post From A Bitter Muggle Who Never Got Her Letter.” #MagicalWorldProblems

1. You’re late for class before the moving staircases moved AGAIN.

Is there a time schedule for when these things rotate? Are they even safe? Imagine you’re running late for Potions, and you’re on the staircase. Without warning, it swings to the left, and you’re suddenly on the opposite side of the castle then where you need to be. And if you figured out how to deal with the stairs leading different places occasionally, there were also stairs with VANISHING STEPS, so you might take some stair to the face when your foot falls through seemingly solid ground.

2. There are owl feathers in your breakfast every morning after the mail flies in.

OK. This just can’t be sanitary. Feathers in your cereal is probably the LEAST gross thing that might fall in.

3. Your robes don’t even fit anymore because you’ve gained the first year fifty.

The food in the Great Hall is TOO DELICIOUS. (Cry me a river, amirite?) And, it is magically never-ending. Unlimited oast beef and potatoes, Yorkshire pudding AND pie?! It would be like Thanksgiving every day.

Evil Umbridge making Harry carve “I must not tell lies” into his own hand? Hagrid letting 11-year-olds into the Forbidden Forest with minimal supervision? (I still love you, Hagrid.) Detention in the Muggle world might be horribly boring, but at least you’re guaranteed to make it out alive.

Is it just me, or does Quidditch seem crazy dangerous? Besides the fact that Harry broke his arm falling off a broom during a match in the second book, (the Bludger had been cursed, but still) a sport where preteens and teens are flying hundreds of yards above the ground seems ripe for disaster. Throw in Bludgers, which are literally iron balls enchanted to fly around and try to KNOCK PLAYERS OFF OF THEIR BROOMS, and you have a sport that does not seem suitable for anyone who doesn’t have a death wish.

Mandrakes’ screaming making you deaf? Cornish pixies lifting you up by your ears? Hippogriffs “attacking” you? (Only after you badmouth them, of course. Buckbeak, we got yo’ back ALWAYS.) Practicing unforgivable curses on students for Pete’s sake? Or, god forbid, you’re seated in class next to Seamus Finnegan and his, as Professor McGonagall put it, “particular proclivity for pyrotechnics.” You might as well say goodbye to your eyebrows now.

7. On second thought, pretty much everything can maim/kill you.

If Hogwarts is really the safest place in the Wizarding World, that is really concerning. Okay, so maybe it had to do with the whole You-Know-Who returning thing, but also it just seems like Hogwarts is a dangerous place. From Whoomping Willows, to the giant squids, to trolls in the dungeons, to basilisks in secret chambers — you literally can’t turn a corner without being put in harm’s way. (And I mean that literally, remember when Hermione was petrified by the basilisk when she used a mirror to check around corners?) The whole ‘risk-of-death’ thing would get pretty irritating after a while.

8. You never learn Defense Against the Dark Arts because the teacher is always, well, dark. (Or deeply misunderstood. Or just an idiot.)

This seems like a very crucial part of the curriculum that is laid to the wayside by the inability for anyone to hold this position for longer than a year. Out of six professors, you have half are evil (Quirrell/Voldemort, Mad-Eye Moody/Barty Crouch and Umbridge), two that are tragically misunderstood (Lupin and Snape) and one is just bumbling buffoon (Lockhart). Isn’t this the last class an evil person should be teaching? (Yeah, yeah, J.K. I get it. It’s “irony” or whatever.)

Granted, Harry and the gang (and those in Dumbledore’s Army) got on the job experience, but what about the rest of the student body? Thank goodness that we were not relying on the woefully underprepared non-wunkerkind members of the young wizarding population during the Battle of Hogwarts, or that might have ended a lot differently.

9. Your fashion choices are limited to what looks like graduation robes EVERYDAY.

When I graduated high school, I thought that you couldn’t possibly have a less flattering piece of clothing than a graduation robe. I get it; it’s prestigious, but it’s basically like a bathrobe without a tie in the middle. At least in the Muggle world, graduation robes are reserved for special occasions. In the wizarding world, the robe is the popular clothing item for everyday wear as well as the mandatory school uniform at Hogwarts. Hey, at least it must be comfy.

Don’t get me wrong — I love a good prank, but it just seems like things can escalate really quickly when magic is involved. Take, for instance, when Ron’s jinx on Malfoy backfires, and he ends up vomiting slugs. Or when the Weasley twins made their magnificent exit from Hogwarts on brooms with fireworks, which was completely badass, but also probably caused a significant amount of property damage. Peeves, the resident prankster poltergeist, makes a general habit of teasing and tormenting the students.

Because you’re literally never alone. You’re studying in the common room, and a portrait suddenly starts talking to you. You trip over your own feet, you think no one saw, and then you hear a suit of armor laugh at you. You think you’re in the bathroom by yourself, and Moaning Myrtle pops up. An introvert’s worst nightmare.

If I’m being real with all of you…

…I’m just a jealous muggle. Give me owl feathers, shapeless robes and Nose-Biting Teacups any day — I’d still go to Hogwarts in a heartbeat.