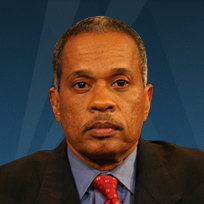 Juan Williams' whole career in journalism has been one long series of cautionary tales.

Would anyone mind if we just copied and pasted our post on Fareed Zakaria getting busted for plagiarism and changed the name to Juan Williams? It’s pretty much the same scenario: “real journalist” Juan Williams was busted for plagiarizing entire paragraphs for a column published by The Hill last month. Williams blames his researcher and says he feels “betrayed,” so we’re supposed to feel bad for him or something.

Is there anything lamer than blaming a researcher for plagiarism? politico.com/blogs/media/20…

Here’s a solution: Don’t have a “research assistant.” Do your own research and write your own columns. politico.com/blogs/media/20…

I wonder how many of these nimrods actually write their columns theothermccain.com/2013/03/08/sho…

#JustAReporter Wait…. what? RT @aceofspadeshqI wonder how many of these nimrods actually write their columns theothermccain.com/2013/03/08/sho… …

For what it’s worth, the paragraphs which made it into Williams’ column on the immigration debate were lifted from a report by the Center for American Progress, a progressive think tank. At least Williams had the sense not to read from the report while in front of a TV camera, but he didn’t have the sense to check his researcher’s work before running with it.

Sooper Mexican has rounded up some media coverage of Williams’ no-no, and much like the treatment liberal Democrat Bob Beckel received when he made his outrageous comments on campus rape, Williams is now a generic “Fox News pundit.”

AGAIN washed up @elaynebooslertricked by newsmedia to think liberal in a scandal is right-wing!!! lol! soopermexican.com/2013/03/08/onc… #p2 #tcot

Hey @elayneboosler are you gonna explain how Juan Williams is a conservative like you did with Bob Beckel?! lol twitter.com/ElayneBoosler/… #p2

We hope funny bones are covered under Obamacare, ’cause comedian Elayne Boosler is in the house!

“Fox News Pundit Caught In Big Scandal.” It was discovered that for 5 minutes last week, he was reporting actual news.

It’s funny because it’s true! Except that it’s not true.

@elayneboosler You do know that Juan Williams is a liberal, right?

Juan Williams IS a democrat, pendejo MT @tiel52093 pundit got in more trouble with superiors when he let a Democrat get a word in edgewise.

Wait, Juan Williams is a liberal Democrat lifting material from a lefty think tank? Is that possible?

.@brianross just heard on the Internet that Juan Williams’ assistant might be a Tea Partier

Go back to sleep, Brian Ross. Tireless media watchdog Howard Kurtz has got this.

Juan Williams Gets Caught Plagiarizing: Was it a major sin? bit.ly/ZxCCrw