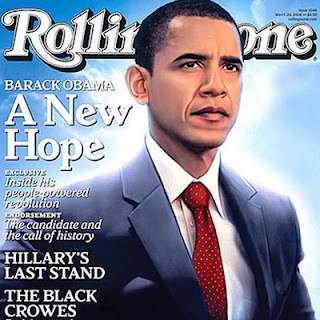 Isn’t he just precious? The President of the United States’ official Twitter account cited Rolling Stone magazine. As a source.

Yes, really. Hey, it’s no surprise, is it? Lying liar who lied, Stephanie Cutter, already said that People magazine and “Entertainment Tonight” are as important as the White House press corps and all. And President Obama is giving hard-hitting interviews to the likes of Glamour magazine!

Plus, he’s lost his usual go-to magazine pimp: Newsweek. So, Rolling Stone it is!

I love the glossy Obama pamphlet I get every week that has a page of music news in it. On my credit card statement its called Rolling Stone?

That’s all he’s got, folks.

Twitter users are quick to mock this latest pathetic attempt by President Obama.

Wow. A new low in politics, the official @BarackObama twitter acct links to a Rolling Stone article to show "facts"

@BarackObama yes the Rolling Stone is such an unbiased source… What businesses have you started? What payrolls have you met?

@BarackObama If Rolling Stone is right, will you take their position on the Drug War, too?

.@BarackObama forgot to tell everyone to take these Liberally biased opinion articles by Rolling Stone with a grain of salt.

@BarackObama does Rolling Stone counts legit journalism? I've never seen any from them.

@BarackObama Do you really read Rolling Stone and are you stupid enough to admit it? No wonder our economy is in the toilet.

@BarackObama You know you're desperately grasping at straws when you're relying on Rolling Stone for investigative journalism! #Romney2012

@BarackObama is scrapping the bottom of the barrel sourcing Rolling Stone magazine for his attack on Romney. Prezzy is a desperate loser.

Bingo. The desperation, it burns.