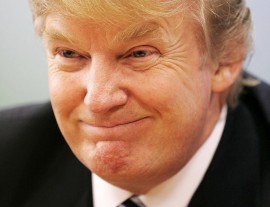 Losers such as George Will and @Rosie use me to get publicity for themselves. They are strictly third rate.

While Trump has a long history of not caring much for Rosie O’Donnell, to say the least, he likely included her this time because she tweeted this out.

George Will: Donald Trump Is 'Bloviating Ignoramus' http://t.co/R57woTPl via @HuffPostMedia

After George Will dubbed Donald Trump a “bloviating ignoramus,” the real estate mogul shot back by calling the columnist the “dumbest (and most overrated) political commentator of all time.”

ABC News’ Will on Sunday blasted Trump during an appearance on “This Week” as he questioned why Mitt Romney would host a fundraising event with someone who continues to give credibility to birtherism.

“I do not understand the cost benefit here,” Will said. “The costs are clear. The benefit — what voter is going to vote for him because he is seen with Donald Trump? The cost of appearing with this bloviating ignoramus is obvious, it seems to me. Donald Trump is redundant evidence that if your net worth is high enough, your IQ can be very low and you can still intrude into American politics.

Oh, my! Who knew George Will had it in him?

George Will may be the dumbest(and most overrated) political commentator of all time. If the Republicans listen to him, they will lose.

No, you just got called out! LMAO @realDonaldTrump George Will may be the dumbest(and most overrated) political commentator of all time.

@realDonaldTrump and we're going to listen to an egotistical asshole instead?

Oh, dear. No love for The Donald.

Your move, Mr. Will!