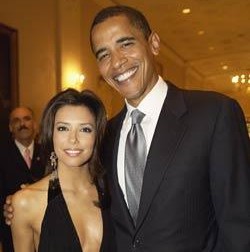 So apparently Eva Longoria was quoted as saying that if you're a woman you can't possibly vote Republican. REALLY??? Watch me.

Addressing the “Women Vote 2012″ summit in Colorado this weekend, actress and Obama campaign co-chair Eva Longoria told a group of 400 women “there is no way you can vote Republican” if you’re a woman.

Some willful minds on Twitter have interpreted “can’t” as a challenge rather than a foregone conclusion. No way? Way!

Obama Co-Chair @EvaLongoria: There Is No Way Women Can Vote Republican http://t.co/C2LMYizN This WOMAN WILL & no LATINO Should vote for O

Obama Co-Chair Eva Longoria: There Is No Way Women Can Vote Republican http://t.co/YKozmVPJ Yeah? Watch them!

Obama Co-Chair Eva Longoria: There Is No Way Women Can Vote Republican http://t.co/4FB3fOQz I vote R b/c I don't want govt controlling me

So, what should women do?

Hello, female conservatives. Please let @EvaLongoria know that you will be voting Romney this fall. She doesn't believe you. #WarOnWomen

Longoria’s speech reportedly did not specify if men could vote for the party of their choice.

Longoria, a People’s Choice Awards winner for her work on “Desperate Housewives,” was nominated for another award following her comments.

Stupid out of touch Hollywood comment of the day: (lm)… http://t.co/s0x6ufqZ