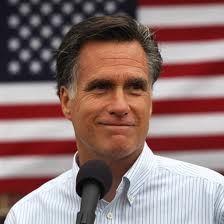 We'll have coverage of dueling campaign events on opposite sides of battleground Ohio next hour. Mitt Romney speaks in Cincinnati at 1:30pm

Point one went to Team Romney when the campaign bus made the rounds, honking, at the Obama event. Point two also goes to Team Romney:

As if Obama would be on time. MT @mpoindc: RT @joevardon: Romney moves his speech to 1:30, getting ahead of Obama's 1:45

Reports from on the ground, while waiting for Romney to take the stage.

@emrwilkins Get used to this. Much hurrying up and waiting in political reporting #yellfreebird

The Obama campaign says they first had the idea for today's visit to Ohio… and that Romney then tacked on his visit.

Romney’s press secretary scores another one against Team Obama.

@GarrettNBCNews We'd rather beat him on job creation. More new jobs in MA w/Romney than in the whole country under Obama. #doingfine

ONN has live team coverage of Obama & Romney beginning @ 1:30. Major economic speeches from both. How will it play in Ohio? #teamcoverage

Twitchy will monitor the speech and provide updates.

#Romney starts by thanking #Kasich & #Portman for their help in Ohio primary pic.twitter.com/UPMGFIgm

The zingers are flying!

RT @hollybdc: Romney on Obama: "What he says and what he does are not always the exact same thing"

@BarackObama is "looking at a one term proposition." #mitt2012 http://t.co/3mQqbPDZ

Romney needs to follow his "talk is cheap line" with its natural conclusion — "mother f—er!"

Heh. Then throw down microphone and yell “Romney OUT.”

First round of applause comes from Romney declaring that he'll build Keystone XL himself if he has to. #ohel

15 minutes in – still haven't heard exactly what Romney will do. Mostly criticism of Obama administration. #ohel

Romney: Obama's giving an economic speech because "he hasn't delivered a recovery for the economy."

"I'm going to get rid of Obamacare." @MittRomney (a popular line in OH)

Not such a good move?

Get back to hitting Obama, please.

Ask, and ye shall receive.

Romney says "I want to help the middle class of America and I’m going to do it."

Romney, I think, is going to fire the deficit.

.@MittRomney: Isn't great to live in a country where risk-taking & success are rewarded. .. A BIG part of his mssg

In his half of Ohio duel, Romney says Obama is "is long on words and short on actions that have created jobs."

Romney: "I saw Marco Rubio the other day…" #drink

Ohioans rooting for the other guy.

Ohioans must be rooting for Portman. Two Rubio mentions in two days and no applause. That is unusual.

I am pretty sure Team Obama does not want to run against this Romney. Very good speech

Will Obama take up this challenge?