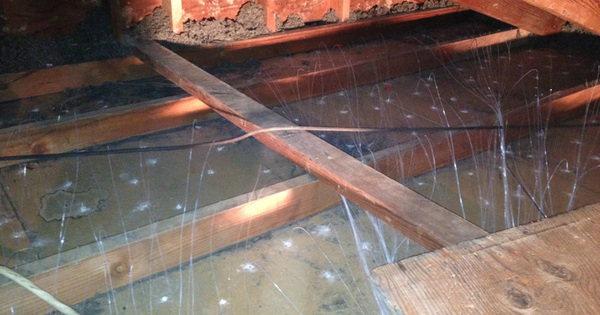 Redditor DRC_Goes_PEWPEW recently shared this amazing DIY project he did in his unborn son’s nursery. Using fiber-optic lights his aim was to create the effect of the ceiling having hundreds of stars, all slowly fading in-and-out in a soothing way. Here is the whole process he went through to create this amazing effect, in his own words:

I used 1.8 inch painters tape to mark off where the beams in the ceiling were so I didn’t drill the holes for the stars in to a beam.

Then I used a staple gun and some kind of landscaping string to make a 1 ft x 1ft grid on the ceiling. I figured this way, the room is 12 x 10, which is 120 sqft, and there are 600 strands, that gives me 5 stars per sqft. I tried to drill the holes randomly, but the grid helped me maintain a pretty even layout.

Finished grid. The kit I purchased had we different diameter stars. I really just tried to space them out randomly.

Boo kitten was a pain in the butt during this process.

Until this point, the project was fun. Now that crappy part.

All of the insulation had to be removed from above the room. I removed about 9 trashbags of this stuff. It was a mix of roll and blown-in.

Good enough. I kind of wish I took more time to clean up the dust. All the black dust became a pain in the ass when I had to glue all the strands in to place.

Burton did not enjoy not being able to join me in the attic.

This is the kit I purchased from Wiedamark.com. It came pretty quickly and so far I haven’t had issues. It included a light source with a twinkle wheel already installed, 600 fiber strands (2 bundles of 3 hundred strands (three different size strands)), a remote, a color wheel you can add to make the stars colored, and a key fob to turn it off and on remotely.

Here is the light source.

And the key fob. A little chintzy, but it does the job. I might try to find something better in the future.

This is the bundle.

My initial thought was to encase the entire bundle in electrical tape, but it was a bad idea. It made the entire thing too rigid and tough to deal with. I ended up taping the bundle every foot or so to keep the thing together and as tangle free as possible. Even that was dumb. Just using zip-ties worked best.

I did actually leave the very end here covered in electrical tape where it went through the ceiling. Maybe about the last 10 inches of it?

This is the light source and bundles mounted in the closet.

Bundles in the attic. I recommend stretching them in the opposite direction you are installing and laying them flat. One of the most tedious things about the project is trying to pull individual strands from the bundle to install while keeping the rest of the strands from tangling.

Looks cool with the lights off.

More of the strands pulled through.

It was really cool to walk through this stuff. It’s kind of like Avatar, but with more insulation itch…

More of the glow.

This is with almost all the strands pulled through and some of the excess trimmed.

I saved the cable management to the end. Which was a mistake. Start early because I really wasn’t able to manage the first bundle.

After all the strands were pulled through, I had to go back and glue every. single. strand. in place. The worst was trying to squeeze where the roof meets the edge of the house. And the nails from the roof. Make sure you are up to date on your tetanus shots.

I sprayed the ceiling using an portable Wagner paint sprayer. After two coats, I trimmed all the strands, leaving about 3-4mm of excess sticking out. The excess is so if I ever want to paint the ceiling again, I can just snip the painted end of the string off and the light will shine again. It would look better to snip it flush, but then I don’t think you could repaint the ceiling…

Lights off. Total count, 596 stars. I broke 4 strands in the process.

Total, I estimate this project took about 40 hours. It was the best/worst idea I ever had for this nursery. It was really tedious; especially because I did it by myself.

How awesome is that. My dad just put glow in the dark star stickers on my ceiling, which I loved. So I can only imagine the great memories this will create for his son in the coming years. Source Share this amazing starry nursery with your friends.