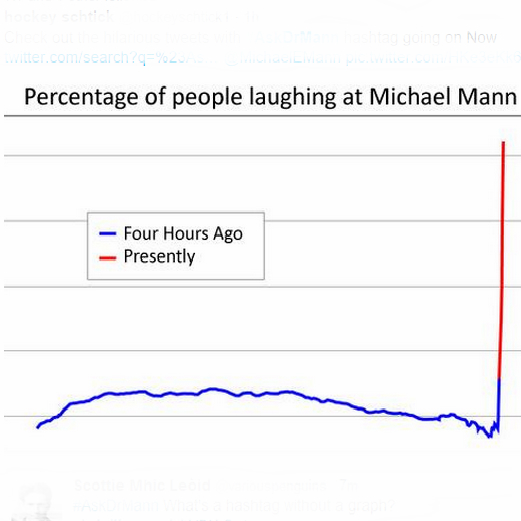 Go join the live fun at #AskDrMann The Streisand Effect on steroids.

Looking forward to #AskDrMann questions. Note that trolls & those engaged in bad faith will be blocked & reported.

Guess what happened next.

The #AskDrMann hashtag is still a complete and utter disaster. Couldn't happen to a nicer guy.

Mann’s threat to “block and report” detractors didn’t seem to be much of a deterrent after Steyn helped get things rolling:

#AskDrMann Would you trade your fake nobel certificate to stop the oceans arisin'?

If 1970's scientists, with the best available science, were wrong about Global Cooling, who's to say you aren't wrong too? #AskDrMann

When @MarkSteynOnline eats your lunch, what will you serve him for dessert? #AskDrMann @MichaelEMann

Should you be walking around in public with such a brittle ego? #askdrmann

#AskDrMann When you claimed to be a Nobel laureate, didn't you make yourself a "public figure" under New York Times v. Sullivan?

Can you cite some specific examples where you predicted a climatological event and then it happened as predicted? #AskDrMann @MichaelEMann

Since Twitter is only 140 characters let me lay it out to you in a pic… #AskDrMann @Schenck @MichaelEMann pic.twitter.com/JjtpZF0s42

#AskDrMann please explain how this is possible I thought all the ice melted and all the polar bears died? pic.twitter.com/VQ65FMSRjT

#AskDrMann Why does even @MLiebreich think your work is garbage and hopes you will get off the stage soon? @MichaelEMann

#AskDrMann Should I expend the carbon necessary to travel to NYC for the climate march you just referenced?

When you say Sandy was related to "climate change", would you call that a "mistake" or a "lie"? #AskDrMann @MichaelEMann @Paladin1969

Can you explain why temps and CO2 level have no notable correlation in the present interglacial? @MichaelEMann @MarkSteynOnline #AskDrMann

#askdrmann:: Why did you write "The McIntyre and McKitrick paper is pure scientific fraud"? http://t.co/C7iOgzNSAH

#askdrmann I wish to purchase some carbon, who do I make the cheque out to? Cui bono??? @MichaelEMann @ClimateHawkVote

Is there a way to stop people who note you're rubbish at science? #AskDrMann @MichaelEMann

#askdrmann @MichaelEMann in what way do your unprofessional comments regarding Dr Curry's work advance climate science?

.@MichaelEMann will I be sued for defamation before or after you block me? #AskDrMann

#AskDrMann why does your latest legal brief falsely claim that you had nothing to do with the WMO cover picture @MichaelEMann ?

#AskDrMann @MarkSteynOnline Mike, there's a giant orb in the sky. Let's harness it. Use it to regulate Earth's climate. Problem solved, no?

Earth hasn't warmed in almost two decades. Possible all that "missing" heat was on Lois Lerner's hard drive when it "crashed"? #AskDrMann

#AskDrMann Since tree rings fail to match temps recently, how can you be confident they accurately match past temps?

Is it getting hotter in here?

Steyn has written an update as to where Mann’s lawsuit stands:

In the meantime, maybe Mann or Al Gore can explain this: