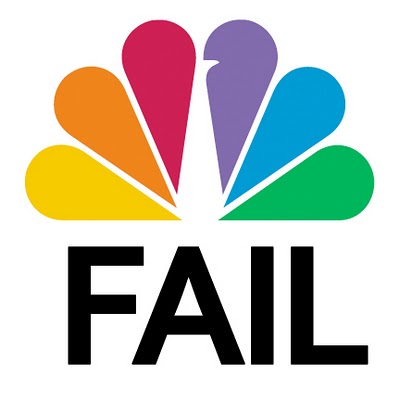 After taking heat for airing events on a tape delay, NBC decided to give live coverage a try. Whoops.

A pair of vigilant Twitterers grabbed shots of the bathing suit malfunction:

@stoolpresidente @Barstool_Sports. Did you see the side boob from the usa spain womens water polo pic.twitter.com/OPONtoCZ

Hey, at least the logo’s in the right place this time!

NBC totally just showed a full boob from the underwater cam of water polo. When you know the girls rip each others suits off check the tape

Anyone see the side boob from the womens water polo spain v. Usa? Let's see the suit grabbing underwater and …oops….way to go @nbc

Oh, Jeebus. We just saw nipple and boob on #NBC. Those water polo girls get a little grabby with those suits. #Olympics #yikes #helloFCC

Ladies and gentlemen, we have #NBCFail:

But it happens so fast on live TV. Wait. It was NBC? Never mind @tyduffy: NBC Showed an Underwater Boob During Olympic Women’s Water Polo

Home for lunch watching USA Women's Water Polo match and NBC replayed twice a swim suit being grabbed in slow motion, and there is a boob.

just when you think NBC was getting better by airing live olympics, they fail by making it delayed again because a boob was shown.

Yeah NBC just nationally broadcast a waterpolo girls boob being pulled out of her suit.. Keeping it classy

Once wasn’t enough, though. Apparently, NBC broadcast yet another shot of an American player’s exposed breast:

#NBC just did it again! Another boob shot of a #USA player, this time they left the camera on her longer.

So NBC broadcast underwater footage of a boob during water polo. I don't get the big deal about showing a boob, they already show Bob Costas

We have officially seen the nipple on NBC’s soul!