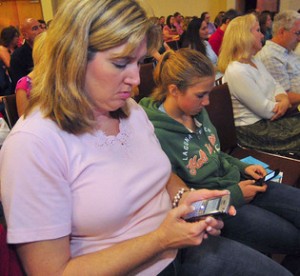 Tweeting to you live from church.

I’m tweeting from the church y’all. Lets see if Jesus sends me a fine lookin’ angle from the heavens….

Doing “the St John shuffle” move to the center of your row to make room for the latecomers! Hmm, we sat here first. #Easter #pewshuffle

Tweeting you all live from church I came because I got bribed by getting an easter egg at the end!

Even President Obama has been known to tweet from church on occasion.

If your tweeting from Church right now your a scumbag

But some pastors encourage it. Yes, really:

Church is one of the last places you’d expect people to whip out their cell phones and start texting. But it’s highly encouraged at the Fellowship Church in Arizona.

The pastor points to a Bible verse that reads in part “go into all the world and preach the good news to all creation.”

He thinks modern technology is the way to do that, even if some people find it disrespectful.

In all seriousness, there are many people that believe that you shouldn’t Twitter in church.  As a pastor, I personally say, “Get Your Tweet On!”  As a matter of fact, I say “Tweet and Tweet Often!”

Wow: Obama tweets threat to finish what he started from church?