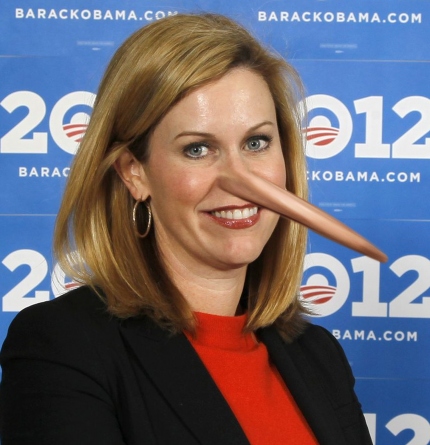 As a Democrat, I am horrified that @TheDemocrats would use Xinhua (official mouthpiece of Beijing regime) to counter Romney on his China ad.

Oh, yes, they are. Lying liar who lies, Obama deputy campaign manager Stephanie Cutter, tweeted out a Reuters article quoting the state-run news propaganda agency of the Chinese Communist Party as a “must read.”

Must read:China's Xinhua slams Romney for making his money off Chinese companies before running for pres. #hypocrisy http://t.co/ZkHe8pu7

Propaganda is now a must-read. To be fair, Cutter likely finds a kinship there; Everything out of her mouth is a lie.

Citizens swiftly take Ms. Cutter to the woodshed. Is she that full of idiocy or that full of lies? Perhaps we should embrace the power of “and.”

@stefcutter They're almost as communist as you.

.@stefcutter Oh, honey. That's a propaganda site. You might want to be like them, but you're not there yet.

.@stefcutter well now we know where you get your daily news from #xinhua

@stefcutter Even you cannot be this stupid or this desperate…Wait? What?

Starting to wonder if @stefcutter is working undercover for Mitt… #giftinggaffes

Then she tried to deflect. Deflect like the wind! As only a pathological liar can, of course.

.@Reince What's offensive is that Mitt thinks voters will believe he'll be tough on China -he's personally profiting of China as we speak.

.@stefcutter @Reince c'mon stef try the truth for once