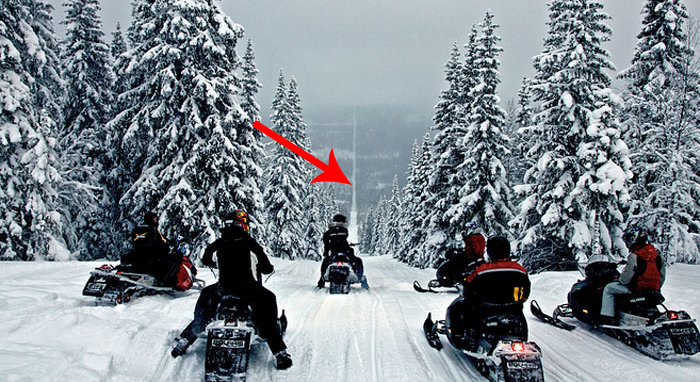 Just for your geographical amusement, the pictures below are the coolest photos ever taken of some of the most interesting international borders in the world.

1) Norway and Sweden – Snowmobilers line up to ride the pathway of removed trees making up the border between the two Nordic nations.

2) United Kingdom and Spain – This is the checkpoint at the international boundary between the British Overseas Territory of Gibraltar and Spain.

4) Argentina, Paraguay, and Brazil – The point where the Iguazú and Paraná rivers converge is known as The Triple Frontier, connecting the three South American nations.

5) United States and Mexico – Picture of the border between Nogales, Arizona, on the left, and Nogales, Sonora, on the right. With approximately 350 million legal crossings being made annually the US-Mexico border is the most frequently crossed border in the world and is close to 2,000 miles long.

6) China and Nepal – The summit of the highest mountain in the world, Mt. Everest, marks the border between the small landlocked sovereign state of Nepal and China.

8) Netherlands and Belgium – The borders in the town of Baarle are the most confusing borders in the world. The entire town is surrounded by The Netherlands but 26 separate pieces of the town belong to Belgium. For clarification and the interest of tourists, the border is made visible on all the town’s streets. This way it is always clear whether one is in Belgium (Baarle-Hertog) or in The Netherlands (Baarle-Nassau).

9) Costa Rica and Panama – This single-lane bridge over the Sixaola River, a natural border between the two Central American countries, is used by thousands of cars, trucks and pedestrians every day.

10) Brazil and Bolivia – A river-divided border shows the difference in deforestation in the rain forest of Brazil (light green) and Bolivia (dark green.)

11) Poland and Ukraine – This part of the border between the two European nations gets decorated every year for a local art festival (The Land Art Festival).

12) Slovakia and Poland – Mt. Rysy in the Tatras mountains marks the border between the two EU member nations.

13) Argentina and Chile – This statue of Jesus Christ located high in the Andes mountains signals peace between the two South American nations.

14) Afghanistan and Pakistan – US soldier on watch at the Torkham Gate, which divides Afghanistan from Pakistan, and is a major border crossing between the two countries.

15) United States and Canada – This is the longest international border in the world, stretching approximately 5,500 miles.

16) Egypt and Israel – Canadian astronaut, Commander Chris Hadfield, took this amazing photo from the International Space Station. It shows Egypt on the left, Israel on the right, and the self-governed entity of The Gaza Strip stretched out along the Mediterranean Sea.

17) Austria, Hungary, and Slovakia – This picnic table marks the location where the borders of the three EU nations meet.

18) Vatican City and Italy – The entrance to the famous St. Peter’s Square marks the border between Italy and the sovereign Catholic city-state of Vatican City.

19) Spain and Morocco – High fences to stop illegal immigration into Spain mark the borders of Spain’s two North African exclaves of Ceuta and Melilla that border Morocco. The two Spanish cities are each entirely surrounded by Morocco. Pictured here is Ceuta.

20) Pakistan and India – The Wagah border ceremony is a daily military practice that the security forces of India and Pakistan have jointly followed since 1959. It takes place every night before the flags are lowered and the gate locked on the only road between the two Asian countries.

21) North Korea and South Korea – The Joint Security Area pictured here is the only portion of the Korean Demilitarized Zone (DMZ) where South and North Korean forces stand face-to-face.

22) Northern and Southern Hemisphere – Not a national border this, but this park in Ecuador mark the point of zero degrees latitude, where the two hemispheres meet.

If you’re from an island nation, now you know what your country is missing out on! Source: List inspired by this discussion thread on Quora. Share this list of interesting borders with your friends below.