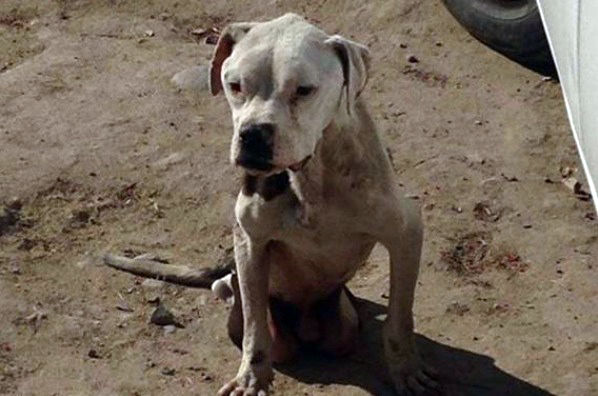 Thor was found on the side of the road in Mexico. He was starving, sick and dying. His back legs were paralyzed, so he was just dragging his body along. It was a miracle he was still alive at that point. If picked up by a dog catcher in Mexico, he would have certainly been euthanized. However, thanks to the kind people at The Mutt Scouts, a nonprofit dog rescue in Los Angeles, he was given a chance to truly live.

Thor was in terrible condition when he was found. Thankfully, the people at the Mutt Scouts wanted to take him in.

The woman who found him picked him up, and drove to Tijuana, Mexico, where he was put on an IV.

JF Pryor and Nikki Audet, the founders of the Mutt Scouts, were so happy to have another “kid” to rescue.

Now, 2 months after being cared for at the rescue, Thor is almost unrecognizable. He has been fitted with a wheelchair, gets round-the-clock love and is taken to therapy.

While at therapy with Two Hands, Four Paws, Thor is encouraged to fight back for his strength.

His handlers won’t push him, though. “We’ll take him as far as he wants to go.”

Now, Thor is full of life and love. He even moved his tail… just a little bit.

He had a horrible past, but his rescuers didn’t want to focus on it.

Instead, they looked at his bright future – and helped him reach it.

There are dogs all over the world who are in desperate need of help. If you ever see a dog in need like Thor, don’t just pass him by. There are countless kind-hearted people in this country who want to help special pups. Thank you to the folks at The Mutt Scouts for all of their hard work. Without them, Thor would have been toast. Source: The Mutt Scouts via Huffington Post Share Thor’s heartwarming rescue story with others online by clicking below.