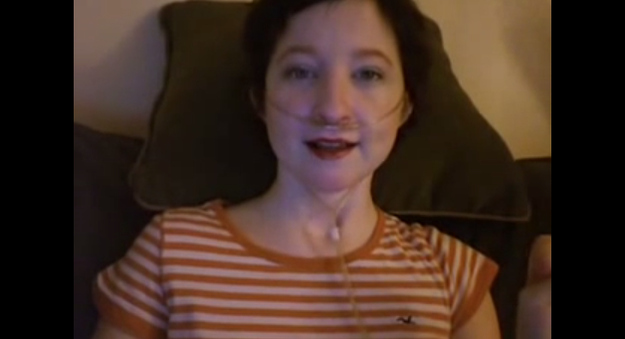 Esther Earl was a beautiful young woman that was battling thyroid cancer. During that struggle, she made brutally honest video blogs. The teen had an amazing outlook on life and became famous, almost overnight, for her strength. She even inspired John Green’s novel and upcoming movie, “The Fault In Our Stars.” She fought long and hard against the disease killing her, but in 2010, she tragically passed away. She was only 16 years-old. So, it was a shock when her parents received a message from her a year after she died.

When Esther was only 14 years-old, she wrote her future self a letter through FutureMe.org.

The letter was scheduled to arrive three years after it was sent, when she should have been 17. It arrived in her parent’s inbox a year after she died.

She wrote honestly about her situation, but was still full of hope. “future me, i hope you’re doing better than present me.”

“i hope that if you still have your cancer, at least it will be gone enough for you to be off oxygen. and if it’s not, just remember to use that Ocean Spray to keep your nostrils moist :] and i hope you’ve tried to talk to more people that also have cancer. in the world, there’s not ONLY boring people with cancer. there are people that are awesome, but maybe you just haven’t met them yet. you never will if you don’t try.”

Esther encouraged her future self to change the world, to eschew fear and doubt and to just LIVE.

She also wonders what her family will be doing. She asked questions like “oh, mom, how is she? is she teaching again? is she happy? she works so hard now, everyday she’s so exhausted. she does too much. i love her, and remember to tell her that everyday.”

She even asked herself some (heartbreaking) questions about boys: “what about, oh those silly things, boys? have you been kissed yet? amidst allllll the health problems and psychological problems, i still want to find a guy i like, who likes me back.”

“i can’t help it, it’s just one of those stupid things i want. have you at least had a like who liked you back? geez…”

Esther’s life, battle with cancer and her outlook inspired her parents to write the book ” This Star Won’t Go Out: The Life & Words of Esther Grace Earl.”

The book is a collection of her drawings, notes and family stories. It is a wonderful way for this family to remember their precious daughter.

Even at the young age of 14, Esther possessed strength and wisdom most of us could only hope to one day acquire. The letter she wrote to herself was filled with so much hope, but she acknowledged the hard truths of life. Although it probably broke her parents’ hearts to read the words their daughter once wrote, she was actually giving them one final, loving gift. I wonder if Esther knew just how important that letter would be. If you’d like to know more about Esther and her battle with cancer, visit This Star Won’t Go Out or buy the book on Amazon. Source: This Star Won’t Go Out Please share Esther’s moving story with others. More people should know about this lovely girl and her strength.