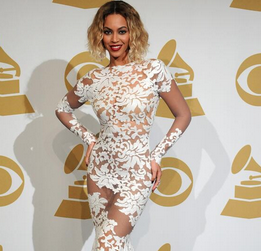 While the dress had many admirers, plenty of Twitter users thought the dress reminded them of some not-so-flattering images.

Yall gotta stop this foolishness Beyoncé dress look like my mom old curtains how much she get paid to wear that?

Beyonce's dress reminds me of every relative that's ever been married in the 80s. Don't like those sleeves.

I love Beyoncé
But she looks like a doily
That dress isn't cute lol— haruhi (@galvxnic) January 27, 2014

But not necessarily in the good way “everything.”