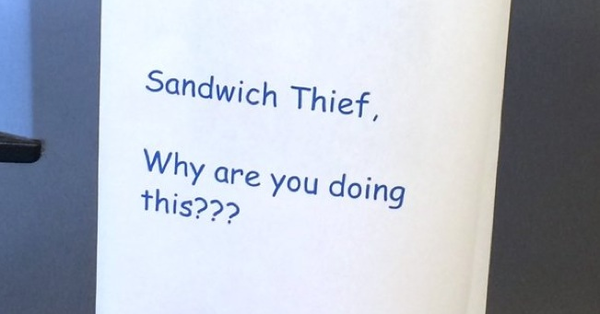 No offense, and I really mean that, but if you write passive aggressive notes, I just have like zero respect for you. If you can’t like, you know, be all direct and forward with people then you, this is just my guess here, really need to be more mature. If that’s what you think you want to do, of course. … or whatever.

Just because you don’t partake in Post-It passive aggression, doesn’t mean you’re free from their unassertive wrath–even in so-called “professional” environments. Take a look at this series of notes that was spotted by the team at CollegeHumor. You won’t believe how ridiculous it gets or how quickly it gets there. Check it out!

CollegeHumor
And so it begins…

CollegeHumor
No! Not HR! I’m shaking in my boots. We’re allowed to say “boots” here, right?

CollegeHumor
That sandwich looks pretty good, but is it worth all of the fuss?

CollegeHumor
Apparently it is.

CollegeHumor
The suspense is really starting to get to me.

CollegeHumor
Here HR comes to save the day!

CollegeHumor
They would have been better off asking for another $10 bill.

CollegeHumor
Weep we will.

CollegeHumor
If only they spent as much time on their apologies as they did on their threats.

Yikes. With co-workers like that, who needs enemies? Sandwiches are precious things that shouldn’t be tampered with.